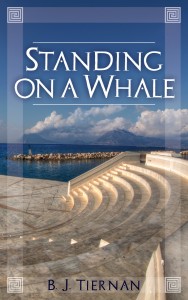 Standing on a Whale

About Standing on a Whale:

Recluse Lance Stavros is a successful doctor who runs his own practice, but on the inside, he’s basically high-functioning human wreckage. He was born into a loveless home that lacked the nurturing to help him develop an ability to cope with life’s challenges. Now Lance is forty-seven, and the only reason he’s survived the past four decades without taking his own life is cowardice.

As hopelessness overcomes him, and he’s finally finding the guts within to pull the trigger on his existence, a house call pulls him out of the deadly spiral. It will turn out to be the call of his lifetime.

Lance becomes a live-in medic for a controversial mystic and lecturer who irks the Greek government—and becomes an assassin’s target. Amid this new and curious world, and a reignited past romance, Lance battles his cowardice to investigate who is trying to kill his employer, and he’s about to uncover more than he bargained for.

Those who live with, or have experienced, emotional pain, destructive tendencies, or addictions will find Lance’s story familiar, engaging, and at its heart—inspirational.